Confined by the oppressive summer heat, a single-minded mother, and the limits of girlhood, a young girl's outing to the corner store stirs an unexpected self-realization. The Scar is a narrative short that begs the question: Amongst the clatter of a world that tells little girls who and how to be in the world, can we entrust them to make their own decisions, even if they may be the "wrong" ones? 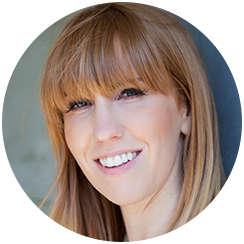 Brittner Shepherd is a newly Texas-based documentary and narrative filmmaker. Her films have screened at festivals around the world, and she has also produced numerous hours of quality programing for public and cable television for outlets such as the Smithsonian Channel, ESPN, CNBC, and PBS's award-winning series Independent Lens. Recently, alongside Ecky Malick, wife of Academy-Award winning director Terrence Malick, Brittney produced the upcoming children’s adventure film "Into The Who Knows!", which was directed by Micah Barber. She co-produced the PBS documentary, "A Fragile Trust," directed by Samantha Grant, about the Jayson Blair plagiarism scandal at The New York Times and is the co-creator of a PBS news game "Decisions on Deadline," which teaches journalism ethics through an interactive and entertaining experience. Brittney is also the co-producer of "Out Run," directed by Johnny Symons and S. Leo Chiang, a feature documentary that follows the only LGBT political party in the world on its historic quest to win congressional seats in the Philippines. Brittney was the associate producer of the Emmy Award-nominated "A Village Called Versailles" and "Mr. Cao Goes to Washignton," directed by S. Leo Chiang.

Growing up in this world can be tough for any young girl, especially in an environment where women of all ages are still told what to do and how not to act. Director Brittney Shepherd explores this issue in her film “The Scar” with the main character’s journey through childhood. We see Zara on a path to independence and witness her development as she slowly begins to make her own decisions.

PBS: What was it like working with the actress of this film, especially when there are so few lines and emotion is really important here?

BRITTNEY SHEPHERD: Working with our actress, Abilene (Abby) Prewitt, was a great experience. Abby is a very contemplative and thoughtful person in her own life, so most of our rehearsals were spent with us talking through and imagining what the inner world of Zara, her character, was like. Because I work a lot in non-fiction, the process of asking her questions and probing her to respond emotionally from where she thought Zara was at various points in the story worked well for us. There were facets of the character that I encouraged Abby to create for herself but to also keep secret from me as well as her fellow cast members.

In the end, Abby created a nuanced backstory for the character, most of which I still don’t know. In the film, we witness only a specific moment of Zara’s life. I believe it was Abby’s deep connection to knowing her character’s backstory that allowed her to bring depth to this super vulnerable moment in Zara’s life that we, as an audience, are witness to. Abby evokes us to think about what likely happens in this world after the film ends and also before it started. For me, as a director, that was the most rewarding aspect.

PBS: How did this story come about and where did the idea for the focus of the scar originate?

BRITTNEY: The idea for the film came from my many conversations with women about a specific moment in time, often in childhood, where they remember their own bodies being a focal point for other people’s attention. That attention, either warranted or unwarranted, becomes a factor, a force even, that gets integrated into your reality and your identity of being a women. When you’re young, you’re still learning this reality and it can be uncomfortable and confusing. Just imagine: You are in a body that everyone else has ideas about and yet you’re still working to form your own ideas about your body.

In the case with Zara, everyone around her makes decisions about her body – her mother tells her to put on a shirt and cover her body, her mother tells her where to go (where her body can and can not be), the stranger at the market tells her not to pick her scab and decides to touch her face. The only decision that Zara gets to make about her own body in the film is to pick the scab off. In the film, we meet Zara when she already has the scab on her leg. We don’t learn where she got it from or how long it’s been there, but we know it draws her attention from time to time. Her decision to pick the scab off is the Zara finally making her own decision about her body. It may not be the right one, and to many, it may be the wrong one, but it is her decision. It’s literally her flesh and she chooses to make a bold choice.

Furthermore, what is scarring — and will most likely continue to leave a scar — is the interaction she has with the man at the convenience store. This, in my mind, is the scar that will linger with Zara forever far beyond whatever is left on her knee.

PBS: Let’s backtrack to that a scene. We see her face covered in food and for a moment the stranger at the store attempts to clean her cheek without her permission. How did that scene develop and what was the decision behind it? What were you trying to show us?

BRITTNEY: All day and every day, women of all ages must navigate a world where their bodies are sites of other people’s attention, discussion and dissection. We are constantly learning to adjust, react, take action or sometimes just cope with these interactions.

For me, the scene between Zara and the man at the convenience store was a means of exploring one of these seemingly “minor” moments and the huge weight it can carry for the young girl involved. Sure, the man at the convenient store could have thought that his action was harmless, but situated within the other realities of Zara’s day, can it be? What does it mean that he doesn’t ask her consent to wipe her face? What would it mean if he did ask her? What would it mean for her to be given the chance to either refuse his cleaning of her cheek or accept it? These small moments happen to us all the time and they make up a nuanced language that we learn to speak as women about what consent means on a daily basis for us in regards to our bodies. By exploring this one moment thru Zara’s eyes, we get a sense of some of these complexities.

PBS: Her mother tells her to cover her shoulders and later we see that same man tell her to clean up her food and not to pick at her scab. Yet as you mentioned, we do see her make her own decisions throughout the film as well. What message do you want people to get from this about childhood and young girls in our society?

BRITTNEY: Part of my inspiration for making this film was to examine all of the different ways that we, as a society, tell little girls about how they should or should not relate to their bodies. In the film, I wanted the main character to have conflicting feelings about all of the different forces that come into play about her body as she navigates a typical summertime afternoon. In her home life, her mother governs where in the backyard she can play, and how dirty she can get. And then, upon sending her on an errand, her mother also demands that Zara cover up her body with a shirt to conceal her shoulders. It’s during the bike ride there where we see Zara truly free from these earlier elements that confined her — she’s plays in a puddle, finds a ladybug, and wanders on her bike in a carefree fashion.

While at the corner store, her body is again made the subject of scrutiny when a chance encounter with a stranger invites an uncertain interaction leaves Zara conflicted and confused. En route back to her house, we understand that she’s unsure, unsteady and definitely changed.

Upon return to the house, Zara makes a bold choice about what to do with her body. This is the first time that she makes her own choice, albeit a difficult one. In this way, we come to understand Zara’s desires to find her own limits and her own definitions of what works for her. “The Scar” begs the question: Amongst the clatter of a world that tells little girls who and how to be in the world, can we entrust them to make their own decisions, even if they may be the “wrong” ones?