When a new bridge is built connecting his island to the mainland, a boy has to come to grips with the change and opportunities that come along with it. Love of his home, love of a partner, and love of family all seem to be falling apart and slowly pushing him towards the inevitable, crossing that bridge himself to see what lies beyond the horizon. 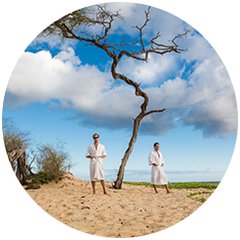 Tyler Nilson is a filmmaker from North Carolina. He explored the seas of the South Pacific as an adventurer for a handful of years, and eventually decided to take his rich desire to tell stories and move to Los Angeles. He also is one of the world’s top hand models and enjoys making easy money doubling his hands for actors like Brad Pitt. Last year he released a narrative short film called "The Moped Diaries," which people seemed to enjoy. He is currently in pre-production for his first feature film "The Peanut Butter Falcon."

Michael Schwartz is a producer and filmmaker from Northern California. His roots as a traveler and life artist are constant influences on the projects he chooses and people he surrounds himself with. In 2014, Michael and Tyler Nilson collaborated "The Moped Diaries" and co-founded a production company called Lucky Treehouse; together they make films, commercials, and marinara sauce. Their first feature "The Peanut Butter Falcon" is currently in pre-production.

Within Tyler Nilson, Michael Schwartz and Nick Vitale’s “The Moped Diaries,” we witness the evolution of a young man as he navigates the harsh realities of the world and copes with loss in his life time and time again. Nilson and Schwartz spoke with PBS, revealing the people, situations and locations behind the story and their message for the audience.

PBS: During the film the audience witnesses a boy losing his mother, father, brother and girlfriend – there’s a lot of loss in this film. What was the inspiration behind the story?

TYLER NILSON: Mike and I co-wrote it together, so I’m sure we have different inspirations, but for Tyler I really wanted to write a story that — I was going through some stuff in my own life that I really wanted to face, and I kind of thought if I could write a character that could face some really big hurdles, big bridges, that I could do the same. But I pulled the string on the bow back as far as I could for any good character in a film and essentially made that person lose everything, because I wanted to know what that felt like. So, that would be my feelings for that. I need to go through a big breakup.

MICHAEL SCHWARTZ: Yeah, I was just going through a big breakup and decided to make a film about it.

PBS: Tyler, you are from North Carolina. Mike, are you also from that area?

MIKE: No, I’m from California.

PBS: OK, so out of curiosity why did you both decide on this location and why all the imagery of fishing, water and shipwrecks?

TYLER: One: because that ship’s awesome, and two: because I’m from there, and three: because it’s really magical.

MIKE: Yeah, Tyler has a real gift for art direction in our partnership. I mean he brought a lot of that to the table, and then I’m a sensitive gangster, so I played on the emotions and the emotional stuff. And when we get together, we just have a lot of ideas and he’ll say stuff and I’ll say "That’s great," and then I’ll say stuff and he’ll say "That’s great," and so I think visually it’s hard to beat Outer Banks, North Carolina.

PBS: So on your acting, Tyler — you’re acting in it and Nick [Vitale] was in it. Why did you both choose to be in the film, as opposed to reaching out and auditioning other people?

TYLER: I don’t know, I just felt like I could do it. I mean, I guess I always just pictured myself [in the role], and I think I just play the character really well.

PBS: And how do you get into character for something like this?

TYLER: I don’t overthink it too much, to be completely honest. I just go for it.

PBS: There’s a lot of symbolism within your film. So for example, there’s the shovel where you’re kind of being hit over the head by love and loss, and then the bridge I guess is change. Are there any other symbols viewers should be looking out for?

TYLER: Sure, there’s a bunch of good stuff in there.

MIKE: Yeah, there’s a bunch of good stuff there, but I like letting that stuff be unspoken so people will go back and watch it for a second or third time. And it might mean something different to somebody else and that is equally as valid and worthy to us. I will tell you that there’s some good use of color. That’s all; I’ll just leave it at that.

PBS: What kind of advice do you have for all the Winkis out there? He was the one that helped motivate the main character to leave but he stayed. So do you have advice for that person?

TYLER: So Winkis — I have no advice for any Winkis, I only take advice from Winkis. I only have love for people like that.

MIKE: I mean in the behind-the-scenes, what you don’t know about Winki is his backstory. He’s lived a life and he’s decided that he wants to live on that island and other people decided they don’t want to be on an island. So just because something’s right for somebody doesn’t mean it’s right for another person. That’s right for Winki.

UNC-TV provides people of all ages with life-changing media through its distinctive array of programs and services, including four digital channels: flagship UNC-TV; UNC-EX, the Explorer Channel; Rootle, UNC-TV's Kids Channel; and the North Carolina Channel. UNC-TV’s 12 stations make up North Carolina’s only statewide television network, made possible through a unique partnership of public investment and private support. UNC-TV is committed to producing, broadcasting, and sharing content for and about North Carolina, making it the state’s most important source of information about North Carolina. UNC-TV is PBS and more for all of North Carolina.