I AM A WINTER CYCLIST

Winter weather doesn't stop Ellie Mitchell from hitting the road (or the trail) on her fat bike. She picked up cycling from her dad, and now she regularly competes against him and other cyclists in the Anchorage winter racing circuit. 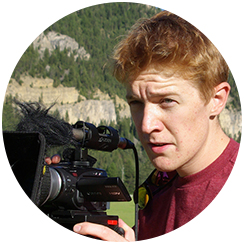 From the Sonoran Desert to the North Slope, Eric enjoys getting out in the field, meeting folks and finding new ways to tell compelling stories. He's excited to be part of a team of thoughtful and energized video producers at Alaska Public Media.

Filmmaker Eric Keto says he could spend a decade in Alaska. Intrigued by the people and the atmosphere of this chilly state, Keto shadows Ellie Mitchell in his film, “I am a Winter Cyclist” as she challenges men and women several years her senior to a competitive bike race — in the snow. Keto discusses filming with Mitchell and her father, and the bonds of Alaska’s bike community.

PBS: Ellie’s story is inspiring and the film touched on a subject matter that not everyone across the U.S. might be familiar with — especially those of us who panic from a mere dusting of snow. What was the reason behind highlighting a topic like this and what do you want viewers to take away from the film?

ERIC KETO: I worked on this piece pretty early after I got to Anchorage, and I had done a little bit of cycling by commuting and whatnot when I was in Portland. So I was curious about what the biking scene was like in Anchorage. I was surprised to discover that people bike-commute year-round and have an expansive bike racing circuit in the summer and wintertime. I wanted to capture the community spirit of the bike scene in Anchorage and show that not only do people bike to work and school on a regular basis but there were opportunities beyond that.

PBS: It was mentioned that there are not as many junior cyclists as there are adults. How did you discover Ellie’s story?

ERIC: After looking through a roster of folks who had competed in local racing events around the community, and speaking with a few of the cyclists, Ellie quickly rose to the top as a unique and compelling character.

There are a lot of interesting characters in the bike scene but Ellie’s scene caught my eye because she’s a younger athlete and she’s a woman. There are a lot of older guys in these races. I wanted to showcase someone different from the regular crowd and it was cool to see it was a family thing and to see that the community nurtures young riders.

PBS: During the film the audience has a chance to witness Ellie competing in a 50K race, a major feat for anyone let alone someone so young. They see her at the start and finish of the race, but what was the process like while filming her during this event and were there any moments that really stuck with you while witnessing her race?

ERIC: I had heard a lot about the community atmosphere surrounding racing and winter cycling in Anchorage. Shooting out at the event allowed me to see this first hand. I hope it came across in the video. I definitely was glad to see her interaction with her family at the end [of the race], and, you know, shooting races is tough. At that point we didn’t really have a solid GoPro at our office. I had been borrowing somebody else’s and you think back and had we had our own GoPro I would’ve wanted to get some more footage just thinking about how you cover a race in different locations.

But the thing I wanted to capture that was most interesting to me was her interaction with her and other cyclists and her family. It demonstrates that they’re there to support her and makes a big difference.

PBS: The audience sees the impact of the Alaska weather on Ellie and the rest of the cycling community, but what is it like filming in an environment like this working with dark hours and managing equipment in snowy weather?

ERIC: A good pair of gloves and hand warmers makes a big difference when it comes to shooting in Alaska. Also, keeping your extra camera batteries warm is essential. Really though, I think the biggest challenge when it comes to any of these projects is not so much the technical equipment because a lot of that can be surmounted. Basic scheduling can be tough when you’re trying to turn around a few different projects and connect with people in the community and work out their work times.

You get into a rhythm and have an idea of when the sun might come up and might not and the cameras have been surprisingly — we’ve had them down in cold temperatures and as long as you’re keeping the batteries warm and yourself warm things tend to flow OK. It hasn’t been — I thought it would be more challenging coming up. During the day you want neutral density filter with all that snow but once you get into the rhythm of shooting, I was surprised it wasn’t so crazy.

The big thing with working on these Indie Alaska videos and the gig up here at Alaska Public is we have a small team of video shooters and editors here and it’s nice to work with other folks that are dedicated to the craft. We critique each other’s work and we go out to the field to shoot together from time to time. You always come back and you’re working on a video and “Oh maybe I changed this or maybe this didn’t come out how I wanted it to be,” but its nice to be able to talk to some of those issues out with some of the people who have experienced them.

Alaska Public Media harnesses the power of multiple media platforms to make a more informed and connected life possible for all Alaskans. Alaska Public Media produces and presents news and content that provides lifelong learning opportunities in public affairs, health and leisure, science and nature, economic and social development, civic engagement and world events. The company is located in Southcentral Alaska and is comprised of KSKA radio, KAKM-TV and alaskapublic.org. Alaska Public Media also operates the Alaska Public Radio Network (APRN) and a shared television service with KTOO in Juneau and KYUK in Bethel. Alaska Public Media and its affiliates deliver content that reaches 96% of the population of Alaska.